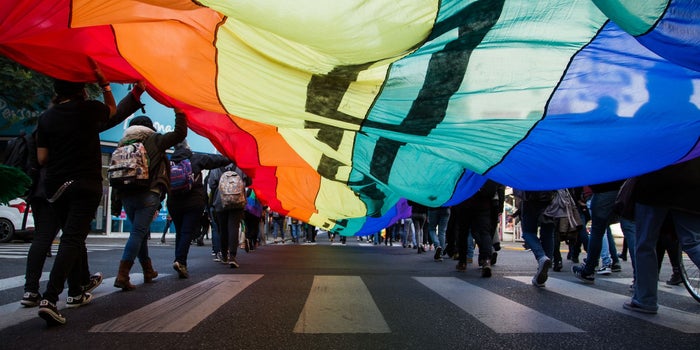 If you’re going to go where the money is—to pursue the greatest spending power—you’ll be joining an ever-increasing number of companies (still somewhat quietly) reaching out specifically to lesbian, gay, bisexual, transgender, and queer consumers.

In many cases, these consumers have a two-person household, each member with above-average education earning above-average incomes. And many have no children to raise, so they have a lot more money left over every month than their heterosexual counterparts with families.

I’m willing to say here what hardly anybody else is: The vast majority of marketers are heterosexuals who may profess having no problems with LGBTQ people but who are, in truth, uncomfortable about the idea of designing advertising and marketing programs to attract them as customers, clients, or patients. If, for your own nonbusiness reasons, you have no interest in or willingness to deliberately and specifically market to affluent gays and lesbians, just know it’s a bad business decision and, if you’re running a business in which there are shareholders other than yourself, a fiscally irresponsible decision.

Mainstream America includes gays and lesbians. This doesn’t, however, mean that they’re a fully absorbed group unresponsive to targeted marketing and specially directed messages. To the contrary, they consistently reward those marketers who make a special point of designing unique advertising to appear in the publications only they read and creating especially gay-friendly sales and business environments. The trick, as it is when appealing to any specific group, is not to be condescending or clumsy.

Marketers ignore or resist all this to their detriment.

How to Match Media with This Market

The top three ways the LGBTQ consumers are likely to learn a business is LGBTQ-inclusive are:

But can outright target marketing work?

The automaker Subaru turned their struggling company around by advertising to a group of consumers other car companies were ignoring: lesbians. Internal research showed that a surprising number of their customers were lesbian, so the company crafted advertising for those buyers. Subaru ads featured captions like “It’s Not A Choice. It’s The Way We’re Built,” and utilized openly gay celebrities like tennis star Martina Navratilova.

Any marketing outreach to a particular group of target consumers has to begin with striving to understand the target audience and organize it into manageable subgroups.

Community Marketing & Insights has been conducting LGBTQ research for 29 years. They divide the marketing into three identities and three generations, producing nine sub-markets:

The generation divides are:

A closer look at the identities, in brief:

Age brackets obviously matter, as they do with the entire population, and in much the same ways as with overall population.